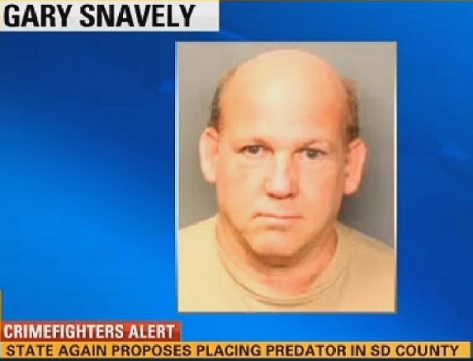 In August, a judge determined that Snavely, 51, could be safely released in San Diego County as long as he continued to get treatment. Public comment related to his release from prison will be accepted at a Dec. 19 court hearing. Last month, officials proposed placing Snavely in Borrego Springs, but that plan was withdrawn.

Snavely was convicted in 1987 of molesting two Orange County girls younger than 10 and served three years in prison. He was released, but violated his parole and was returned to prison.
In 1996 while living in San Diego after his release, Snavely was convicted of failing to register as a sex offender and was sentenced to 16 months behind bars.

Prior to his release from prison, the District Attorney’s Office filed a petition to civilly commit Snavely as a sexually violent predator. In 1998, Snavely was found to be an SVP and was ordered to undergo treatment at a state mental hospital.

In 2008, the court granted Snavely’s request for conditional release, but he was returned to the hospital several months later for medication misuse.

In April, Snavely filed a petition for conditional release, which Judge Louis Hanoian granted after hearing testimony from two mental health experts and reviewing reports from other experts.

Members of the public can comment on Snavely’s proposed placement in Jacumba Hot Springs by going to the court hearing on Dec. 19 or do the following by Nov. 21:

One thought on “Sexually Violent Predator and Pedophile”