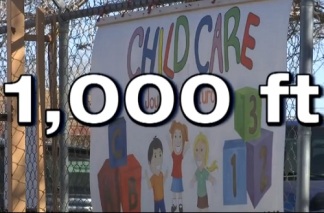 Day Care is less than 900 feet from Sex Offenders

February 25, 2015
NM Dept. of Corrections working to decide what to do with sex offenders living near ABQ daycare.

14 sex offenders living near an Albuquerque day care are on parole or probation. Their living situation is in violation of not only city law, but New Mexico Department of Corrections rules.

Wednesday, the DOC responded to the story KOB discovered, but the potential solution is a double-edged sword.

It started with concerned parents in Barelas, who pointed us to a dormitory-style apartment housing 18 sex offenders less than 1,000 feet from a daycare.

But the DOC is responsible for 14 of those offenders, and now they’re deciding whether and where to move them.

Since KOB discovered 18 registered sex offenders living at The Dorm in Barelas, within 900 feet of a daycare, the DOC has been reviewing policy. “Our policy is 1,000 feet,” said Scogin, who supervises the monitoring of 14 offenders who live at The Dorm.

A daycare down the street moved in after many of those offenders — but still, this living arrangement violates not only city ordinance, but DOC policy.

“We’re not viewing them as being in violation at this point,” said Scogin, “because what is occurring is not their choice.”

“And the fact is – the offenders who are living on this site are in compliance with their supervision; they’re following their conditions,” she said.

But now, some may have to move — something Scogin says creates more problems than it solves.

“They have a higher likelihood of becoming involved with drug use or picking up new charges,” she said. “Having a stable environment makes a big difference with these offenders.”

What makes this even more tricky — neither the city law or DOC policy say whether it makes a difference if the offender lived in a neighborhood before a daycare or school opened.

As far as moving them — offenders have to find a place they can afford, one that will accept them, and many of those options have long waiting lists.

One thought on “America Wakes Up To Cronyism: Day 10”